Scrolling through Facebook and Instagram? Oh, you’ll be surprised at the amount of time we spend on Social Media 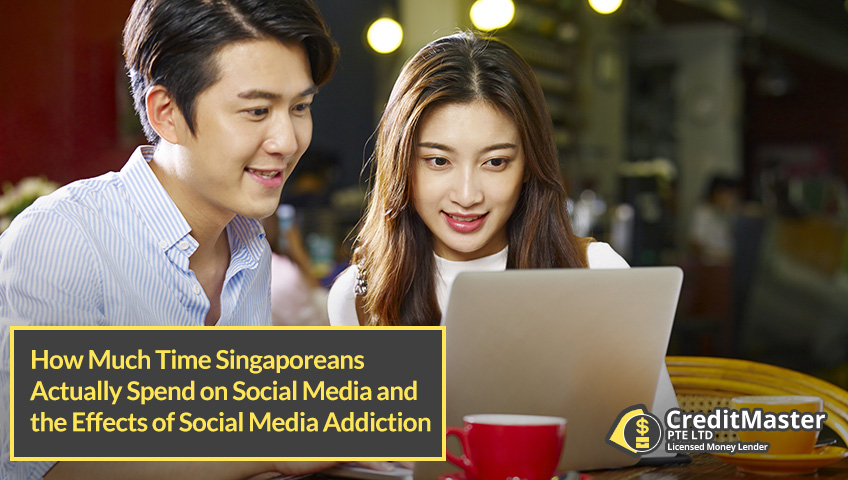 The digital age is well and truly in full force with the World and Singaporeans have not been left behind.

This has been confirmed by recent statistics which revealed that Singaporeans are spending a whopping 3 hours and 12 minutes daily on their mobile devices.

Now, that’s big considering that employees spend an average of eight hours at the workplace daily. So in total, the average Singaporean spends minimally twelve hours a day on electronic devices. The many short ten to fifteen minutes scroll on Social Media has contributed to that huge amount.

“We are social” is the mantra and a good percentage of the mentioned time is definitely used on Social Media. Use of Social Media has increased significantly as people go online to read news, keep up with their friends, to network and more. Some have even taken Social Media as a platform for work, leading to the increase in influencers and bloggers.

The term “Social Media Slavery” is an understatement for some.

Overall, Singapore is one of the most digitally social nations in South East Asia. The country has about 3.2 Million users on Facebook alone with Instagram and Messenger bringing the figure to almost 4 million as at the turn of last year.

Whatsapp and Twitter also seem to command a significant following.

Well, while being digital savvy is good in the digital age, spending too much time on social media isn’t too cute an idea – at least according to experts.

Other than the effects of being distracted at work, lower productivity, there are deeper effects caused by Social Media. Scholars have been having a heated debate about the effects of prolonged social media use for some time now and haven’t really arrived at a defined position.

However, it’s clear that besides the cute laughing cat photos, comical hashtags, retweets, likes, and favorites, social media can lead to new anxieties.

For instance, everyone looks happy and triumphant on Facebook leading some to feel as if they are missing out and potentially resulting to depression.

There are even some more accusations against social media;

A  research conducted by two German universities on social networking indicated that one in every three users felt lonely, angry, or frustrated after spending more time on Facebook.

Users were especially affected by what they saw from their friends’ profiles as most seemed to be doing better than them. It is in some sense human nature to compare, and will in turn cause people to feel inferior and develop lower self-esteem. However, it must be noted that certain photos could have been heavily photoshopped or worked on, that it does not relate the actual reality.

Studies have found that peer pressure was more pronounced within social networks. Subjects showed a higher likelihood of changing their minds about “Loving” certain things given enough time.

This means that subscribers fail to see the other side of the coin when online and just follow what’s trending to avoid annoying their pals.

Merely sighting food images after mealtime will still trigger hunger. This eventually causes people to snack on food even when they are not hungry, leading to weight gain.

Marketing research has also concluded that due to lower self-control, heavy social media involvement could lead to increased spending.

Facebook often bombards its subscribers with tens of unsolicited ads each time they’re online. Instagram pages are also typically filled with posts and advertisements from bloggers and influencers on their recommended products.

Seeing all these posts and advertisements triggers the urge to shop and splurge for most people, to keep up with trends and eventually burn a hole in their pocket by purchasing unnecessary things.

More advertisers are joining the platform in droves so the problem is set to become worse.

Instagram users may spend a lot of their time stalking their friends, bloggers or simply scrolling around about advertisements or events. Once they click on a post, they get interested in the tags or curious about other people in the photo/ post and beginning the endless cycle. It becomes problematic when this develops into a habit and one often loses track of their time on Social Media.

The number of likes for each post. Stiff competition has grown with the increase in popularity of Social Media. It has become unhealthy when some users choose to post revealing photos or unhealthy content in order to gain more attention or to gather more likes. To some users, the likes on a post are so important that it affects their self-esteem and confidence.

So, how can the fervent followers flee themselves from the ‘Social Media Slavery’?

1. Users should create a timetable (sort of)

By checking for updates and comments only at specific times of the day, enthusiasts will have time to attend to their more important matters. This might be tough for users initially, but with discipline and perseverance, one can develop the habit of not relying too much on Social Media.

Relying on a diary or a time tracking app would also help to ensure time discipline.

Users should endeavor to record each and every moment spent on social media before comparing it with the set target. With the record and results, it will be easier to plan out your timetable and schedule to get more work done.

One of the factors that contribute to the social media addiction is the notifications.

A notification comes and your phone lights up. You unlock your phone to read the update and suddenly, you find yourself bewildered at the amount of time that just passed. It could be fifteen minutes, thirty minutes or even more than an hour.

For them, the most effective solution is to turn them off.

4. Teaming up with an Accountability Partner

Since most people fail in minimizing time wasted on social media, hooking up with a friend or relative can help keep one on track as they battle the addiction.

Teaming up with an AP means that you report your daily progress to them. Update your partner every small achievement you made or even any goals that you missed. An example could be updating them how much time you were away from Social Media for the day, or if you are closer to your target daily time limit on Social Media.

Reporting to someone gives you a sense of responsibility and at the same time, your partner can encourage you and keep you motivated. Such actions can help to go a long way in overcoming the challenge.

5. Uninstall the Apps – the most effective and toughest method

Another reason why people cannot hide from social media is the ease of access.

Once installed, the platforms sit there on the screen as if to urge users to login and see what their friends are sharing.

In the end, more time goes down the drain as the user is often swamped with updates.

Deleting the apps makes it harder to access the sites reducing the frequency of logging in.

When one first deletes the applications, it will feel really tough. There will be the constant urge to redownload the program or to check your phone. However, after some time, it will become a habit and a routine and eventually, one will not be as reliant on Social Media as they are now.

Social media is a fantastic innovation and Singaporean users have really taken to it as evidenced by the increased time they are devoting to social networks .

It may, however, cause issues such as poor self-esteem, overreactions, in addition to interfering with rational thinking.

As such, it should be used in moderation.

In certain cases, users can also take drastic actions including quitting social community apps completely, if that’s what it takes.

Apply for a loan now
Contact us today for any financial assistance you might need. We promise to exceed your expectations.
WhatsApp us